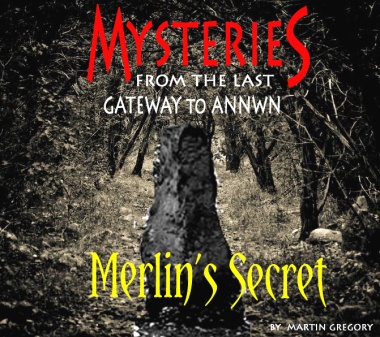 Wise Merlin kept many secrets, one such concerns the fate of King Arthur. By repute, Arthur died at the hands of Mordred (sometimes Modred) at the final battle of Camlaan, slain Arthur was entombed on the isle of Avalon. In fact, Merlin’s seldom believed secret has it, Arthur survived Camlaan to fight another battle. The wise magician knew Arthur would rise again, and for that reason his true fate was kept secret, revealed only to Arthur’s closest and most loyal followers.

The land we now call the Preseli mountains is rich in Bluestone magic. Some have speculated Merlin, the father and son of Wales learnt many of his skills upon the mountains, where that Bluestone magic infused his welcoming soul.

Arthur, led by Merlin and followed by hand-picked men, found the doorway to Annwn. Arthur stepped through and departed his Earthly body. The gifts bestowed were bountiful indeed. Some claim it was the creatures of Annwn that told Arthur of the land of Avalon ,where fruit grew in great abundance. Some believe the inhabitants of Annwn, so enamoured with this Earthly man allowed his use of spectral hunting animals to aid in the pursuit of the boar.

Despite Merlin’s warnings, Arthur journeyed to the Presilli mountains almost every year. Through the entrance of the cave with no walls, he left Briton for the realm of Annwn.

There was the feeling among many within Annwn, Arthur’s visits were construed as something akin to invasion. None felt this more keenly than Gwyn ap Nudd, son of the Faery King. Having inherited none of the delicacies of his father, Gwyn felt a deep fear of being usurped.

On the last day of summer , the son of the Faery King challenged the King of the Britons. King versus King, kingdom for kingdom. The victorious would rule both realms. No doubt Arthur explained that he had no desire to rule over Annwn but Gwyn, convinced he might lose his kingdom, refused to believe the word of any Earthly man. The two warriors battled. For days and days they duelled as Arthur’s men waited at the entrance for their king to return.

Four days of patient waiting induced fear that Arthur might not return. On the fifth day, as the sun rose above the crest of the mountains, Arthur’s men found his lifeless body laying amongst the dew covered grass, at the mouth of the cave.

Arthur was carried back to his spiritual home, back to the Isle of Avalon and entombed, ready for his spirit to return to his body. Ready for the day when Arthur will rise again and lead Briton to glory.

Where the walls of the Earth are thin against Annwn, Gwyn’s mocking laughter can still be heard. He played a cruel trick on Arthur’s men, he knew they would pronounce him dead and carry his Earthly vehicle away. With no body to return to, Arthur is forced to remain in the realm of Annwn, in an enternal battle with Gwyn ap Nudd. There he battles on behalf of all, to ensure the safety of his kingdom and the rest of the world.

The doorway within the Preseli mountains remains closed from the Earth. The fabled ‘second gateway’ has never been found and when Merlin passed, so too did the knowledge. 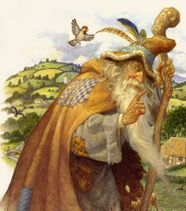 I have thoroughly indulged my enjoyment of all things Arthurian the last couple of days, shamelessly plugging my unpublished novel in the process. Tomorrow will be something completely different. Here in England the nights are drawing in earlier each day and the weather has become cold and misty. Autumn is a-coming and traditionally, it’s the time of year when I put the snooker on so maybe we’ll have something snooker-y soon! What’s that you say? You can’t wait? Me too!

One thought on “Merlin’s Secret”