All first nights are followed by first days. The first morning I woke up in the trailer tent, hidden in our barn-come-shed felt no different to any other time I’ve woken up in a field in the middle of nowhere.

In the last few years Dominique and I have enjoyed a good few evenings doing a bit of ‘rogue camping’, in some woods or random field. This did not feel different. I was cold, and not a little grumpy. I didn’t get at all spooked or paranoid when rogue camping, but on the first night, on our little patch of land, I got the willies. Dom just slept, throughout all my silent freaking out.

Having slept in the trailer section, the next thing we had to do was put up the awning. In the barn. Once we’d figured out how the bits went together, and figured out that those tiny little buttons on the extending poles are not meant to be used by human hands, we managed to get awning section up in about three hours. Not bad, I remember my parents taking over four hours to put up theirs, whilst another couple watched them, keen to observe the sheer miracle of trailer tents. I shudder to think what anyone watching me and Dom might of thought as we sat on the floor of the barn surrounded by loads of different shaped poles, both of us alternating between the classic thinker’s pose and scratching our heads, like chimps with flees. But, once assembled you realise these things are miracles in trailer form. The amount that can be packed in the trailer and the size they can be when put up properly is quite surprising. Not least because we’d somehow managed to put up the awning, with an extension we didn’t know we had. It filled the whole barn. All that’s left is just a space at the back either side of the hitch and about a foot either side with a comparatively roomy three feet in front, from which to enter and exit. On that second day, we left just as it was getting dark, both of us quite pleased with how much space under canvas we had.

That was two weeks ago, and there was still another job still to do. A big one. A really big one.

It was time to turn our attention to moving gear from our room in the shared house in Bristol. We’d already made a small start but with Moving Day looming and the time in the room coming to an end, we had mammoth task ahead, due mostly to the vast, enormous, bloody alarming amount of stuff stored at my parents house for all time. I had again arranged to hire the Ford Ranger, and sold a few family heirlooms to fuel the beast up for another round trip to Carmarthenshire and back. This time though, I’d be towing a mountain a stuff, crammed into an air-tight box trailer. With the beast and I back together, we hitched on the box trailer, loaded the mother to within an inch of its life, and within an inch from the ground, turned on the tunes and proceeded to tow three quarters of our life to a field in Wales. Never look back they say. Unless you’re towing a box trailer filled with all your gear, in which case you should look back quite a lot – to check it’s all still there. The Ranger made the process so, so easy, I needn’t have worried

Night two on the land (we’ve got to give it a name!) was far more restful for both of us. When I awoke at about 7.30 I did have the little moment that was missing from the first morning.  I unzipped the awning and stepped out of the barn into the dewy, misty field beneath a dull grey sky. But then a thought came to me; This was my dewy, misty field beneath a dull grey sky. I shivered. We’ve been here almost a week now, and every morning has been the same.

What have we got done so far? Delayed and waylaid, we left Bristol with our pet rabbit half a day later than planned, we ended up having to stay in a pet-friendly motel. We arrived a full day late and proceeded to build a run inside the awning and making us a cubby space beneath the trailer, just so fluffy wee Gary can explore his new surroundings with us. All three of us silly beats under the barn and canvas together. As if to show me up even further, Gary wasn’t at all alarmed by stuff falling on the tin roof, owls or the gate banging in the wind. I thought he would be, I actually thought he might understand my consternation on the first night. But no. He gaily explored his new surroundings and eventually tired himself out and settled down on the hutch. When I closed the door on him, he barely raised an eyebrow (or eyelash).

When you go Off-Grid, there’s a few things you need to remember.

If you’re indoors and got yourself a fire going, or burning anything you need to have a carbon monoxide detector. Without one, it could well be an off-grid death.

Energy     Have back ups. To start with you might not have your energy-making things in place. We’re using a solar system, and as yet, it’s not in place. Of course you can survive without electricity but even if you have it, it’s still a good idea to have a mix of gas, re-chargeable and disposable batteries of different types for different power requirements. It’s a good idea to have gas too, again a mix of disposable cans and full size cannisters. Have plenty of wood too.

Light    Again, have plenty of back ups. We had torches, touch lamps, candles, a gas lantern, a battery powered and wind-up lanterns. A glow stick or two for emergencies might be handy too.

Heat    We’re here in March. Big jumpers, fleece jackets, waterproofs, wellies. I’ve almost forgotten I’ve got skin underneath this lot somewhere! We’ve got a gas powered heater. It’s quite small but if we zip ourselves into the trailer section, which we tend to do around 8pm, it’s quite cozy.

Stuff     Be organized. Have places for it. It might just be me, I don’t know, but it’s so, so easy to lose things. If you’re the kind of person who goes room to room leaving things behind, don’t go move into a field with those same habits. You’re going to temporarily lose a lot of stuff. I am speaking from experience!

I am speaking from experience. Goodness. Here I am with these fledgling experiences. I’ve got to crack on though. Dom’s applied for a job in a chip shop and we’re waiting on a  delivery of a huge length of photo valvic cable for the solar panels, a charge controller because the last one was crap, and a wire cutter, so even my untrained hands can do a delicate job for once.

That’s all, until next time when the closing chapter of the Off -Grid Life shares the pitfalls of wiring up solar panels to a battery, battens down the hatches for a storm and the tale of a confused rabbit who had to go home. 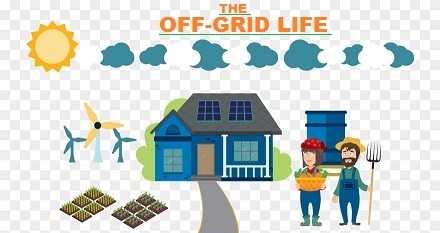 #2: Something to Live In

#3: Going Under the Radar – How We Hid Ourselves Away

No Script For Life  is full of entertaining things to read and listen to, all written by me!  Just go to the ARCHIVE PAGE