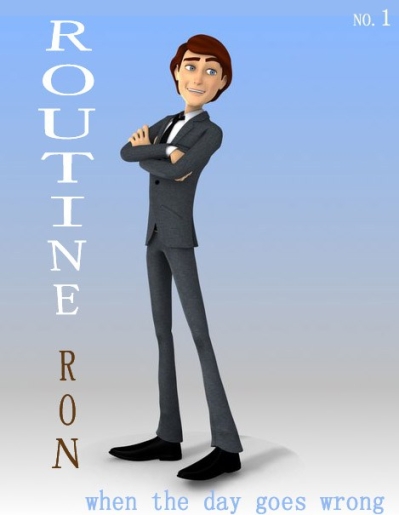 The 7.27 arrived at Emmergreen station almost 6 minutes late. As he stood on the platform, checking his watch for the one-hundredth time, Ronald Pedga was greatly alarmed. The train was always 4 minutes late. But not today.

As the train drew into the station, Ronald, or Routine Ron, as he was known, clicked his tongue in irritation. Stepping onto the train, he found the carriage was more full than usual. His usual seat beside the luggage rack was taken, so he was forced to occupy a double-facing table seat. Ron carefully negotiated his long legs under the table, lowering himself gently into the cramped chair.

Uncomfortable in the crampt space, he sighed and attempted to rummage through his satchel in the for his breakfast bagel.  Thanks to the late train, his first meal of the day now almost five whole minutes later than usual.

Feeling hot, he tried to loosen his collar but as he squirmed, he accidentally kicked the woman sitting opposite. She yelped. “Sorry,” said Ron. “It’s quite alright,” the young, red-haired woman replied. Noticing Ron struggling with his bag, she kindly moved her thick book from the table.

Thanking her, Ron gratefully placed his bag on the table and rummaged again for the bagel. Eventually he found it. With his bag now on the seat beside him, Ron unwrapped the bagel and checked his watch. 7.37. He was now nearly 6 minutes late eating his breakfast! He clicked his tongue and tutted again.

Perhaps noticing how on edge he was, the woman with the red hair, said, “Are you alright? You look very red-faced.”

“Are you sure? I saw you on the platform when the train arrived, you looked very stressed.”

“Well yes I am,” Ron spluttered, “this train is always 4 minutes late, but today it was 6 minutes late. It’s busier and more cramped than usual and my usual seat is taken. I’m not built for these table seats, what with my long legs.”

“Do you do everything to such a tight schedule?”

“Yes of course! Schedule is order. Without order there is chaos. So I have a nice routine that I stick to. It works out very well for me. I have a happy home life, a good job and I’m in excellent physical health. Everyday I get up at the same time, catch the same train to work and come home on the same train at 17.16 precisely.”

There was an announcement that the next station was coming up. The red-haired, freckle faced young woman put her large book in her large handbag. “I used to be like you, I got tired of rushing all over the place, always late for things so I became very strict about my daily routine. I called it a schedule too. But over the years I’ve learned to be punctual about appointments but still go with flow now and then. My advise to you, break the habit of routine. Today, challenge yourself, to do just one thing outside of your routine. What time do you take lunch?”

“Then today take it at twelve thirty.”

He snorted at the preposterous idea. Twelve thirty indeed!

“Try it,” she stood up as the train came to a halt. “You never know something amazing might happen.”

Ron watched her go and thought about what she said as he munched on his breakfast bagel. Today the moisture from the mayonnaise had seven minutes longer to seep into the bread, it was less firm than usual and didn’t taste as good. Despite that, Ron felt that woman might have a point. Okay, he thought, he’d try it.

At 12.15 Ron’s secretary, Raul poked his head round the door to the office. “Time for lunch, Ronald.”

“Call me again in fifteen minutes, can you? I wish to take my lunch at twelve thirty today.”

Raul looked surprised but agreed to call his boss again in fifteen minutes. This he did, and as Ron collected his bag and strode out of the office, he collided with a short, stocky woman in a grey dress. He staggered back apologetically but as he did, the corner of the desk caught him between the buttocks. Still regaining his balance Ron shifted painfully, ripping his trousers as he extracted himself from the desk.

Having bumped into Raul’s lunch date and ripped his trousers, he made his way to the park where he always sat in the same place and ate the same thing, a cheese and red onion sandwich. Today, he was almost twenty minutes later than normal so, his usual bench was occupied. Eventually, he found a rusted bench on the edge of the field where three boys were kicking around a football. Why aren’t they in school? Ron huffed as he took his sandwich from his bag. After carefully laying a napkin across his perfectly creased trousers, he  unwrapped the thick, delicious-looking sandwich and placed it on the napkin. As he unscrewed the cap off a bottle of water, a football plummeted through the air and landed in his lap. The sudden impact obliterated the sandwich and caused Routine Ron to spill the contents of the bottle all over himself.

From there the day just got worse. He decided to jog back to the office because it started to rain. Had he gone for lunch at his usual time, he would’ve been back in the office before the clouds broke. He’d bee further delayed by having to find a shop where he could buy another sandwich. Annoyed and getting wet, he was determined not to get back to work late, he flagged down a taxi. At least he’d arrive back at his office warm and somewhat dry, he thought. Unfortunately the taxi driver was new to the area and took the wrong turn and went up a one-way street. As they double backed the way they’d come, they got stuck in a traffic jam at some temporary lights. Then the engine overheated, so Ron paid the driver and ran back to work in the rain, further than if he’d not bothered getting in a cab at all.

Arriving back at the office a whole hour late, Ron received a ticking off from the boss he was trying to impress, so offered to stay late to make up the time. He caught the 18.17 train home but it was 44 minutes late. It wasn’t Ron’s usual train but, if it was knowing that it was always 44 minutes late might have offered some consolation.

Every bit of consolation was needed when Ron got home to be informed that his dinner had been burnt. Had he arrived home on time, it’d been fine – of course!

After cooking another dinner for himself, drying his clothes and mending his trousers, Routine Ron finally slid into bed 95 minutes later than usual, woke up eighteen minutes late the next day and vowed to never deviate from his routine ever again.

This is from the collection of stories about Routine Ron, a man who lives his life to a VERY precise schedule.