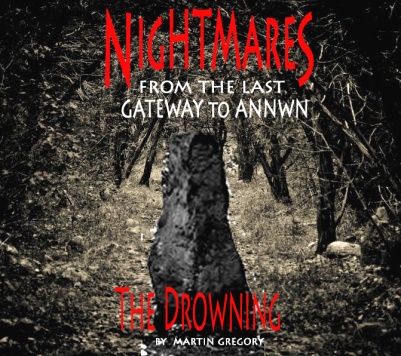 With Hallowe’en just ’round the corner, why not chill your bones with an nightmarish extract from my unpublished novel.

– THE STORY SO FAR –     Paul Gunney has been plagued with nightmares ever since he moved to the village of St. Arvans. A strange woman, Mr Jeavons, says she’s a witch and has told him the Faery King of Annwn is reaching out to him, using a six foot stone in the middle of the nearby forest as the conduit. Naturally, Paul doesn’t believe in such nonsense and he’s determined to prove her wrong. We join the story as Paul wakes up after an unusually good night’s sleep.

He’d slept fantastically well. The alarm went off at six thirty but as usual he was awake well in advance. He’d slept deeply though, no nightmares or dreams, just peaceful, much needed sleep. He awoke feeling  happier and very refreshed.

As he stood in the shower he watched the water run off of his body and swirl around the plug before it disappeared down the drain.

That’s exactly what’ll happen to my problems, he thought to himself, they’ll wash away.

They’ll swirl round the plug and wash away.

For the first time in ages he felt okay. Almost peaceful now that he was sure the sanctity of his sanity hadn’t been compromised.

Wash away without a sound

If anyone should worry for their sanity it was Mrs Jeavons, he thought.

Wash down the Hole

It was late afternoon on the warmest Sunday of the year. Late spring and the leaves had sprouted on the bows.  He could just see the bright yellow fields beyond the trees, that stunning mass of colour on the other side of the river.

The children were leaping and running about the grove below. He hoped Emma was watching them because sometimes the edge of the path just disappeared, it would be so easy for one of them to lose their balance. Shon was the one she had to watch, just four years old and the youngest of the two, he was every bit as fiery as his red hair suggested. Though at times Iain could be just as reckless, being two years older and a lifetime wearing spectacles might have taught him a bit about playing safe, but no.

The two boys were hiding behind the stone, squashed together and trying not to laugh as their mother made an exaggerated show of hunting for them. As she got level with the stone their giggles nearly erupted before they could “jump out” on her. Amid excited screams and laughter, the three of them chased off down the path.

Paul laughed contentedly and let the warm water wash over his head. He pushed off from the side of the pool with his feet and glided through the water. There was a breeze in the air blowing through the gaps in the brickwork, allowing him to feel welcome cool air coming up from the stone below. The architect must have designed this pool to last, he mused. Admiring his own achievement, he remembered the sight of the Victorian plunge pool the day he found it. Crumbling and forgotten, the dark stagnant water looked as immovable as the stone in the grove below. That strange, upright stone in the middle of the forest.

The forest had begun to envelop the standing stone, just as it had it once encoached heavily upon the flat, rocky shelf above, almost completely concealing the pool. Paul remembered all the afternoons spent toiling over his pet project and all the hard work that had gone into pushing back the overgrowth. Once the stagnant water had been pumped out, the ornate Victorian pool, hidden away in it’s little nook of the forest, was finally ready for use again. With a modern water pump and heater, Paul had created a private swimming bath for his family, hidden away on a curved outcrop along the lost path, deep in the centre of the forest.

The gentle ripple of the water soothed his body as the sound of his family’s laughter echoed around the forest, soothing his heart and soul. It had been a long time coming but he was at last feeling happy and content. It had taken a lot of effort to persuade Emma to finally leave her home in Canada, but it had been worth it. In no time they’d been married and blessed with a child, shortly followed by another.

As he lay in the water, the warm afternoon sun cascading in through the trees, he contemplated how lucky he was to have such perfect children and how fortunate he was to have such a joyously gorgeous wife. Once the children were tucked up in bed, he’d have her to himself. He wasn’t sure if it was the water, the sunshine or the perfect stillness of the forest but whatever it was, he wished she was with him now.

Paul rummaged among the clothes he’d left on the side of the pool. If he could find his smartphone, he could adjust the thermostat temperature. It was as if the sun was warming up the water, that and the gas heater was making the water almost unbearable.

Paul’s ‘phone slipped from his wet fingers, bounced off the slate on the side of the pool and fell down among the bushes and weeds. He pushed himself through the water to the furthest side of the pool. From there he could see the grove below but could see neither Emma nor the children. He called out to them but there was no reply.

Steam was now rising from the water as Paul struggled to make his way back toward the edge. Eventually he got there but as he put his finger tips on the ledge to pull himself out of the water, a large shadow fell over him. He looked up, tried to see the face of the stranger but the afternoon sun was glinting in his eyes. He tried to shade his eyes with his hands but found that he couldn’t lift them out of the water. The heat was almost scolding him now.

“Help me.” Paul said to the figure  standing over him, but it remained impassively still.  “Help me!” he shouted. The figure stood, hands at his side. A booming laughter reverberated off the trees.

The gentle ripple of the pool had becoming like waves, crashing back and forth against the rocks behind. As they crashed off the rocks, they caused the next waves to be bigger, higher. Before long he was being washed violently from one side of the pool to the other. Completely unable to control himself he kicked, splashed and screamed.

“Help!” he yelled between mouthfuls of water. “Help me!”

Above him he could hear the sound of female laughter. Through the water throwing him to and fro, Paul could see Emma standing on the rocky outcrop above him. She was almost doubled up, pointing and laughing at her husband as he struggled in vain against the hot, rising waves in the pool. She ignored his cries for help, instead she ushered the children forward to watch.

“See how powerless he is against us,” she said to them in a soft parental tone. “He doesn’t have a chance.”

Blinking in the sunlight Shon looked up, “Will he die, mummy?”

“Can we watch him die, mummy,” Iain asked.

Holding each by the hand, she smiled at them. “Of course we can. Let’s watch him get carried away by the tide.”

Thrashing against the rising level of water, not to mention the rising temperature Paul felt his body crash against the rocks behind the pool. Before he could recover he was carried backward, over the edge of the pool. Washed away by a steaming tidal wave Paul went over the edge and down the embankment. A second, even bigger wave sent him beyond the stone. With water now submerging the bottom half of that tall, cruel rock, his body was thrown against it. Frantically he reached for anything to hold onto, anything but the stone.

Something under the surface of the water floated toward him. Thick and oily to the touch, it was the only thing that stopped Paul getting washed over the edge of the path when the third wave hit. He coughed and spluttered but was otherwise okay as he clung on to the floating object for dear life. Opening his eyes, he looked around at the flooded forest. His wife and children were on the outcrop, enjoying his struggle.

Paul kicked his legs. If he could get to the bank before the next wave struck, he’d be okay. He kicked and used the floating thing to help him. Only now did he realise what the floating thing was. He recoiled in horror as the water turned the floating mass around to reveal a pointed head, topped by red tipped-ears. Paul tried to swim away from it but the thing had again moved and now it was below the surface, coming toward him. He felt a warm searing sensation as the creature’s teeth sunk in. Beneath the surface of the water the Cwn Annwn ripped flesh from the bone of his thigh. Paul would’ve screamed but another tide of water crashed over the edge of his pool, surged toward him and filled his mouth with water. The last thing he saw was Emma and the children. They stood on the outcrop watching and laughing hysterically.

Submerged and bleeding a river of his own blood, Paul was carried away helplessly by the rush of the fall.

Down and down, into the Wye and crash like a wave into the world beyond. There he remained, as dead and broken in that world as he had been in this.

*Otter Hole is an ancient connection of cavern beneath St Arvans, near Chepstow, Wales.

A poem. Lost and forgotten the last gateway to Annwn lies in dark hidden places. The knowledge is gone, and now what?

It was Merlin who showed Arthur the way to Annwn, and it was Merlin alone who knew the truth; King Arthur didn’t die at Camlaan.

The Drowning also features in my unpublished novel, The Scrying Stone.